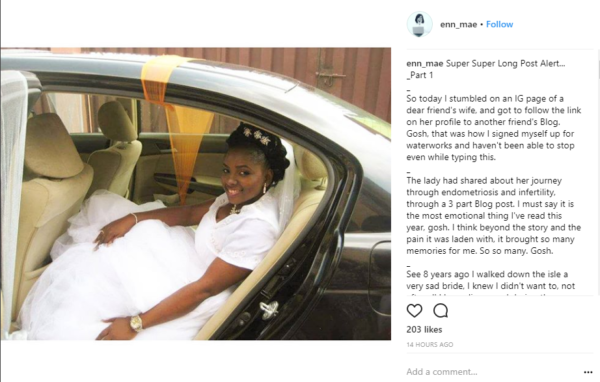 Writer and humanitarian Eniola Enmae Adeniji, in her book ‘I Am Mae:Turned InsideOut’, has revealed she walked down the aisle, 8-years ago an unhappy bride.

Read excerpts from her book;

“Super Super Long Post Alert… _Part 1
_
So today I stumbled on an IG page of a dear friend’s wife, and got to follow the link on her profile to another friend’s Blog. Gosh, that was how I signed myself up for waterworks and haven’t been able to stop even while typing this.
_
The lady had shared about her journey through endometriosis and infertility, through a 3 part Blog post. I must say it is the most emotional thing I’ve read this year, gosh. I think beyond the story and the pain it was laden with, it brought so many memories for me. So so many. Gosh.
_
See 8 years ago I walked down the isle a very sad bride, I knew I didn’t want to, not after all I have discovered during the closest time we spent together preparing for the wedding (since it was a long distance relationship). But I was young, naive, silly, foolish and afraid of failing everyone. I was afraid about what people would say to my mother if I canceled the wedding, what the church would say to my family, what his family would say, what my friends would say. I worried so much about everyone else but ‘ME’. So like a lamb to the slaughter, I walked down that isle. I had cried to bed on the engagement night and my makeup artist had to do so much works to make my face beautiful on the wedding day.
_
Oh I was sad, I tried everything to be happy but I couldn’t. At a point I kept muttering to myself, ‘Eniola, you can do this, you are loving and kind and can make anyone be a better person’. How silly, because I was naive and foolish and didn’t know ‘you can’t make anyone love you, whose intention isn’t to’. _
_
Fast forward to 3 months in it and I knew I couldn’t do shit. I didn’t have the power to, only God can. All I could do was to truly give my best and then focus on God to help do the rest. Oh I was lonely, it was the loneliest season of my life. I wasn’t allowed to go out, have friends or do anything. There was no cable because he believes it was a waste of money. So no TV basically. All I had was my Bible and books. In 3 years I must have read about 100 books and written over 500 articles (chuckles)

READ  13 Signs Your Friend is in Love With You

Part 2…. I was just expected to wake up very early daily to cook, clean, lay still whenever he wants sex even if he pounces on you while sleeping, and just be mute while every decision is made around you.
And when his mother wants you in Osogbo, you are to pick your bag and go to the park and endure an 8hours journey without a single word. With time, all that soon became a norm until a year later and there was no pregnancy.

And then the daily calls started, how I am expected to explain my body and whatnot, explain my periods and ovulation, explain every headache and temperature. And then when we both visit the family for the holidays, I am told to stay indoor so people won’t see I am not pregnant. And when everyone goes visiting, I’m left in the house.
And then his family deciding which Gynea/OBGN was next for me to see, and how it must be in Osogbo and I had to travel 2/3 times every month by road from Abuja to Osogbo to see a specialist, where I was probed and poked.

Oh the endless injections, the bleedings, the constant pain and suffering. Messed up cycle and hormonal imbalances due to all the drugs and injections. And having no one to talk to through it all (because after all in marriage you are suppose to take things and refrain from talking to outsiders). I’d still come back home to a man who saw nothing but a glorified slave and a sex object.

And then gradually the many injections messed up my weight, I wasn’t eating and yet was gaining weight, my clothes weren’t fitting anymore and I was eventually left with 2/3 clothes and had to rotate them every Sunday. Oh the shame and snicker from people. My skin had become so black and carrying my dread without relocking for over a year. I hated that our Church was inside Sheraton, you can imagine the kind of people there. What was worse was nobody ever talked to me to know what was going on. Nobody, they just found a way to go round me while they chatted with him like I wasn’t there. …..Continued in next comment…

READ  My Husband Does All The Cooking and Cleaning, I Only Make Love - Wife

Part 3…. Then gradually depression set in, and then I began to lose my mind. I will be in the sitting room and forget I was cooking and the food will burn with smoke all over the house and I still wouldn’t even know until I begin choking and needed my inhaler. Gosh it felt like hell.

And then finding out a year later through another specialist in Abuja that I wasn’t the problem after all, he was the problem all along, he had no sperm count. Amazing… I think for the first time in a long while I felt joy, I even got to shake my bumbum after he’d gone to work (chuckles). I felt like God vindicated me and for once I was left alone. Of course the abuse continued, but at least minus the poking, endless injections and drugs.

Someday I hope to finish my book and share things I’ve not quite bring myself to share with anyone else. …Now the purpose of this post isn’t to make you feel sad, throw pity party around Naaa. No, it isn’t because I haven’t healed, I have come a very long way in my journey through healing.

The purpose is to advice every young man and woman out here to be patient. NEVER be in a hurry to walk down the isle to anyone you know deep down doesn’t honour God, doesn’t honour you, doesn’t honour anyone. One of the greatest support you can have in marriage is your partner. If they aren’t your partner while dating, marriage won’t translate them into one.

Have you ever watched a war film where 2-3 partners are paired together in a fierce battle to combat an opposing force? Now imagine those partners Waring against each other while also enduring the blow, missiles and gun from the opposing force? Get it? That’s what happens when you walk down the isle to someone who doesn’t have your best interest at heart. I don’t care how rich he/she is, how beautiful or handsome or how ‘nice’ they are, if they do not honour God and honour you, you have no business walking down the isle to them……

Part 4…. I know for a lot of us women, the dream about a Bella Naija wedding can seem so alluring that you ignore the fact that it is just for a weekend. I know a lot of men are daily pressured by families to marry for various reasons, but marriage is forever.

Marriage is beautiful, I have testimonies all around me, but it isn’t a bed of roses, it has its best days as much as it has its worse days. The only thing that causes you to triumph is God and the right partner. There is nothing as amazing as walking through war and minefield with your bestfriend. A man or woman who will stand in faith for you when your faith is all gone. A man or woman who if you end up tomorrow losing your most valuable body parts, will still stand tall beside you. A man or woman that if you lose all your earthly possession will still be blooming beside you while cheering you on.

I beg you in the name of God, wait for him, wait for her and while waiting keep developing yourself towards becoming the perfect spouse you also seek. NEVER neglect the place of God and godly counsel also. Shalom.
Excerpt from my book:
I Am Mae:Turned InsideOut
#IamMae #WomanofValue”