A little girl went to school dressed in a monochrome outfit, not knowing her outfit was going to cause her to be laughed at.

Ordinarily, no one would look twice at her clothes or think it was out of place, but with Cardi B’s baby picture making the rounds and being used as a meme, the little girl’s outfit became a big deal.

You have to admit her clothes bear a striking resemblance to what a much younger Cardi B had on in the viral photo. Her hair also looks similar.

The little girl’s elder sister shared the photo and wrote: “My little sister came home crying ‘they keep saying I look like cardi B’ I LOST ITTTT” 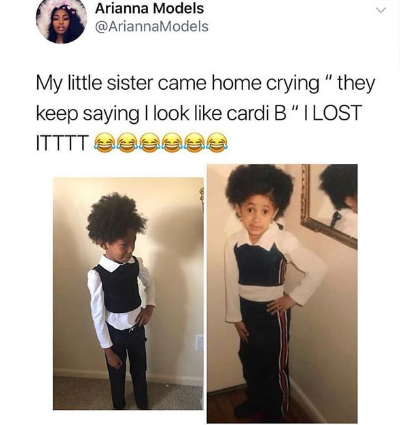