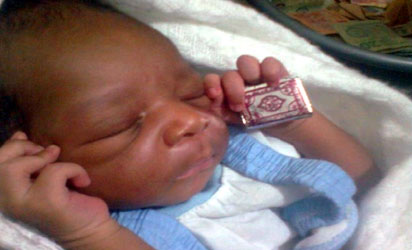 The birth of a ‘wonder boy’, simply referred to as ‘Daddy Samuel’, in Akure, the Ondo state capital, has turned the residence of his parents into a sort of miracle healing centre.

People from far and near have been besieging the house daily to seek spiritual assistance from the two month-old baby said to have spoken in the cradle – two weeks after birth.

Samuel, whose parents claimed was born with a bunch of leaves bonded by a strand of hair, was said to possess a special healing power.

“My wife gave birth on the 28th of August after a bunch of leaves came out of her womb and we were amazed after he began to talk, charging us to proclaim his coming to the world.”

According to the parents, mysterious powers of Samuel, born at a Comprehensive Health Centre in Akure, became noticeable when a bunch of leaves was said to have preceded his coming out of the mother’s womb.

“Two weeks later, Samuel shocked us and his three older brothers when he instructed us to proclaim his coming to the world,” Ajayi said.

However, the baby did not talk when NAN correspondents visited, and neither could the parents show the said bunch of leaves nor play the recording of the boy’s speech that was being circulated round town. Yet, they insisted on his miraculous birth.

The parents, who recently relocated from Lagos, said they had made several attempts to abort the boy’s pregnancy due to economic hardship in the upkeep of the three boys they had before Samuel.
Some of the visitors who visited the house said they were there to satisfy their curiosity and to seek spiritual assistance.

READ  Speakership: Court declines to disqualify Gbajabiamila over US indictment

Oluwadamilare said that circumstances that surrounded the birth of new born baby also happened in the Bible.

“I actually came to see the glory and I have no doubt about it. My stand is that what happened is true because nothing is impossible for God to do.
“I have come to seek spiritual solution in respect of a lady who has visited several hospitals in Lagos over bone problems in the last five years.
“There is nothing fetish about the boy coming to the world with a bunch of leaves, it is just a sign from God,” the pastor noted.

One of the workers at the place, Maruf Akande, also known as Alfa, said the whole situation was a wonder to him, saying that the baby started speaking when he was two weeks old.

According to Akande, who claimed to be the manager of the spiritual centre, people have been coming to the place for the past one month, and the baby’s parents have not rested due to the huge crowd that keeps coming.

” The service rendered was free initially but we have started collecting a consultation fee of N500 per head with a view to reducing the crowd. yet they keep coming.
“People who need help come from far places – Lagos, Abuja and even overseas and they can testify to God’s glory.
”For instance, a woman came from Abuja with three years pregnancy but she gave birth inside a bus conveying her back to Abuja after taking sachet water given to her here.
” The baby only spoke twice and since then he has transfered the spirit to his mother who can heal anyone each time she carried the baby to her bosom.
” The whole thing started when this baby Samuel started saying after two weeks that his parents should announce his glory to the whole world,” Akande said.

He said that no fewer than 300 people registered at the centre every day.
According to him, the baby is fed with pap and still sucks his mother breast milk.
Akande said all clients were treated equally and fairly without any preferential treatment irrespective of status or position.

“Another worker at the venue, Mrs Aina Bello, said that her husband was a beneficiary of the ‘wonder boy’.
Bello said her husband was ill for six days to the extent that some hospitals rejected him since they did not have a solution to his illness.
” We just discovered that my husband collapsed, all his body system became abnormal and he was in that position for six days.
“We have spent about N45,000 in different hospitals but the situation remained the same. Even some rejected him.
” But thanks to baby Samuel that God used to heal my husband. Samuel’s mother just told me, having received inspiration from baby Samuel, to give him sachet water and instructed me to give alms, which I did.

To my surprise, when I did as was instructed, my husband just got healed. He can walk and do normal things now,” she said.

According to her, no money was collected from her and that she has since then become a volunteer taking care of the baby’s clothing.

A lady, who simply identified herself as Bukola, told NAN that she was at the venue because of her mother who had stroke.

Bukola said that she believed the whole thing and that was the reason she came with her mother.

According to her, her mother will be healed when attended to by baby Samuel

The birth of Samuel had also boost economic activities in the area as okada riders now lead people from major roads to the house.

Food and beverage vendors are also making brisk business off the legion of visitors trooping in daily.
The parents also confirmed receiving gifts from various men of God from both Islamic and Christian faiths .(NAN)