Real Madrid and France striker Karim Benzema has spoken out for the first time to the media since the se x tape saga involving him and France teammate Mathieu Valbuena surfaced publicly. Benzema was arrested and interrogated by French police and is accused of plotting and conspiring with childhood friend Karim Zenati to blackmail Lyon midfielder Mathieu Valbuena over a sextape the midfielder was involved in.
Benzema’s involvement in the plot has not yet been fully determined but investigators believe he was approached by a childhood friend, Karim Zenati, to act as an intermediary and convince Valbuena to deal directly with the blackmailers. 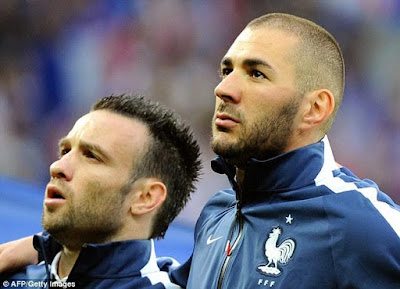 Last week Valbuena said he was disappointed in Benzema but now speaking to TF1, Benzema said;
”I’d heard there was a video out there. I said I’d let him know. But I got the impression he already knew about it. I told him I could help him because I have a friend in Lyon [Benzema’s childhood friend Karim Zenati] that could deal with the problem.
“We spoke about it. I asked him if he had warned his family. I told him I’d found myself in situations like this in the past and that I’d told the police. He [Valbuena] told me he had told the police about it.
Then afterwards, when I hear all this talk about extortion, and that I’d demanded money from him – it makes me angry. The idea that I would need money, or my friend would need money – it’s ridiculous. I’ve earned a good living for a long time. I don’t need money. We never, never spoke about money.”
Asked if he understood why Valbuena has said he is “very disappointed” in him he replied: “I understand. But that night, he wasn’t disappointed. On the contrary. He said to me – and he could tell you this himself – ‘thanks, brother, for having warned me.’”
Benzema also hit back at French prime minister Manuel Valls’ comments for saying he had no place on the French national team..
“I’m getting accused of all sorts of things. They’re dragging my name through the mud as if I was a criminal. It’s horrible.”
He added: “The only thing I regret in this whole thing is to have laughed about it on the phone with my childhood friend [Zenati]. That’s the only thing. I apologise to him [Valbuena] and his family for that. On the phone you act silly; sometimes you laugh about things that may be serious, but you don’t take them seriously.”
‘Hopefully it will end well, we will all be OK … and we will all return to the France team to win that Euro,’
‘I’m not playing for the cameras, I’m not playing a game,’ insisted Benzema .
‘I’m here to be sincere.’
Le Monde published statements given by Benzema to the judge investigating the case after he spent a night in custody at Versailles police station in  November. Benzema denied his implication in the saga and told the judge he was a victim of ‘a big misunderstanding,’ saying he was rich so he doesn’t understand why he will blackmail.
‘I am really disappointed with the magnitude of this story, because blackmail and stuff like that, frankly it’s very serious,’ Benzema was quoted as saying.
‘I’ve been successful in my life and (Zenati) is being looked after, because he is my boyhood friend,’ Benzema said. ‘That’s why I don’t understand this story about blackmail and money.’
The court has placed Benzema under judicial supervision, meaning he cannot meet with Valbuena during the investigation. If the case continues to drag on until the Euros start on June 10, France coach Didier Deschamps won’t be able to call both players in his squad for the continental tournament.
Facebook Comments
READ  I and my team-mates are behind Mourinho - John Mikel Obi