Football legend and top achiever, Thierry Henry was stunned about the viral nickname given to him by Nigerian fans. 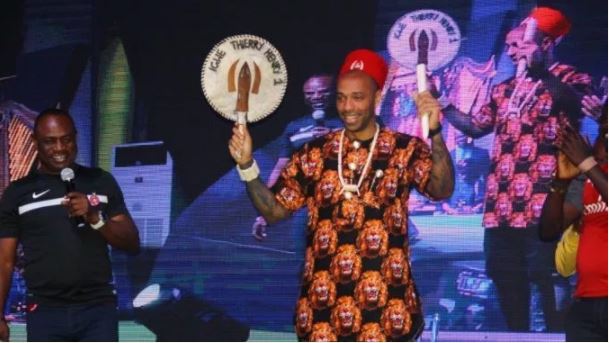 Thierry Henry (Middle)
Arsenal legend Thierry Henry has expressed surprise that he was nicknamed “Igwe,” meaning king, by Nigerian fans.
The former France striker said this during his visit to Nigeria over the weekend.
He was hailed “Igwe” by fans as he arrived the Landmark Centre Hall, Lagos, as a guest in the Guinness Made of Black campaign.
According to the former Barcelona star, his ex-teammate Kanu Nwankwo did not inform him he was dubbed such a name.
“[Nwankwo] Kanu never told me,” Henry said.
He also said that Kanu was the best African player he had played with due to his technical ability.
“First of all, let me say Lauren (Etame Mayer, former Cameroon international) was very good and I love Lauren to bits. But if you go down to technique, I have to give it to Kanu,” Henry confessed.
“It’s just the truth. Kanu was an underrated player, so humble, nice guy, everything about him was positive.
“We all know that famous turn (Kanu’s dribbling style) that he had, even watching him on television, I was learning (Kanu’s dribbling style). He was always good and a good guy, too.
“Like I said, if we go down to technique, Kanu was very good. Kolo Toure was very tough, Lauren had good technique too until he was moved to right-back.”
Facebook Comments
READ  International Champions Cup Schedule Revealed Featuring Chelsea, Everton & 6 Other Giants