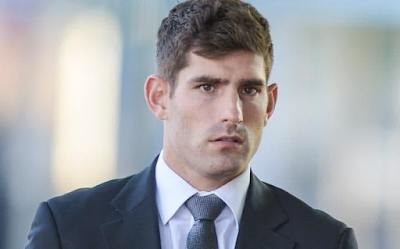 Chesterfield striker Ched Evans has revealed that he won’t apologize to the girl who accused him of raping her as he has been innocent the whole time.
Evans was found guilty of raping a 19 year old girl in 2012 and sentenced to 2 and half years imprisonment, but the conviction was quashed in April after judges found out evidence relating to the complainant’s sexual history could be included in the second trial.
The second trial ended on Friday and the footballer was cleared of all rape charges.
On Saturday night Mr Evans admitted he had been “young and stupid” at the time of the incident.

“I have maintained my innocence from day one, so I can never apologise directly for what happened,” he told the Mail On Sunday.

I think it was a situation that got taken out of our hands from an early stage. She never said anybody raped her. She said she had a blackout but that didn’t mean, like it was said in court, that she didn’t consent.”

Police in North Wales are investigating fresh threats against the girl complainant and a number of individuals who have named her on Twitter, which is against the law due to her being afforded lifelong anonymity as the complainant in a sex assault case.
But Evans has distanced himself from people threatening the girl on social media, (the girl has had to change her name 5 times since the incident) saying everyone should move on from the case.

“The social media stuff, I don’t condone whatsoever. I don’t agree with it. It’s not been easy for her. I know that. I think it was a situation that got taken out of our hands from an early stage. She never said anybody raped her. She said she had a blackout but that didn’t mean, like it was said in court, that she didn’t consent. My behaviour that night was not acceptable – but it wasn’t a crime.”

The footballer, who was 22 at the time of the incident in 2011 and one of Sheffield United’s best players, said he has matured since then.

“We could have had any girl we wanted … We’re footballers.”

“I have got an idea of what goes on in prison,’ he told the Mail on Sunday. “It was a situation I found myself in. A crime was not committed but nevertheless I was in a situation. I know 100% that lads and girls get themselves in that position. Until something comes of it you never think something will happen to you.”

“I was young at the time and I was stupid and I wasn’t aware of the situations you could potentially find yourself in that would land you in trouble. I have never been taught about anything like that. You get your gambling and drinking training but nothing else on top of that. In this day and age people need educating on alcohol and consent.

“I read somewhere you would have to get signed consent. That wouldn’t be realistic but someone needs to come up with something. The best thing is just to be educated. And when they are drunk to think twice about it. How would it look in a court of law?”