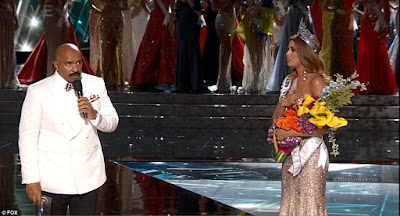 Miss Colombia wiped away tears of joy as the $30,000 blue diamond and topaz crown was placed upon her head and she was named Miss Universe 2015, winning the title for her country for the second year in a row. But her glory only lasted for two minutes.
Just as Ariadna Gutierrez was blowing kisses and waving to her adoring fans she was informed, on live television, that it was actually Miss Philippines Pia Alonzo who was meant to be wearing the crown. 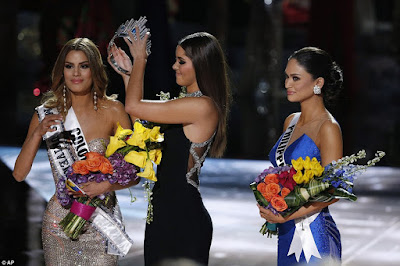 Steve Harvey strolled up on stage, the shame already evident on his face, when he told the crowd ‘Folks, I have to apologize.”The first runner-up,’ he then announced. ‘Is Colombia.’ ‘Miss Universe 2015,’ Harvey then dramatically clarified, ‘Is Miss Philippines.’

Miss Philippines stared wide-eyed at the audience, her lip quivering as Miss USA whispered into her ear and she realized what exactly those words meant.
Pia joined Ariadna on stage and stared into the audinece in shock, Miss Universe 2014 Paulina Vega giving her fellow countrywoman a comforting pat on the back just minutes after they had shared a victorious embrace. 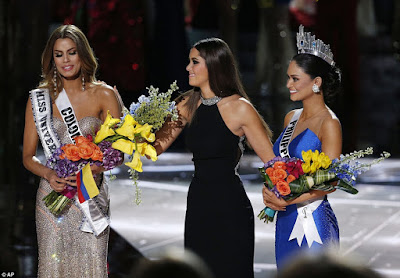 ‘Folks let me take control of this,’ Harvey told the sea of boos and cheers. ‘This is exactly what’s on the card,’ he then said, displaying the results on the camera. ‘I will take responsibility for this, it was my mistake,’ he continued.

‘I can show it to your right here, the first runner up is Colombia,’ it’s my mistake, still a great night. Please don’t hold it against the ladies.’

And then came for the heartbreaking moment when Miss Colombia had to bend down, allowing Vega, Ms Universe 2014, to remove the crown and place it on Miss Philippines head instead. 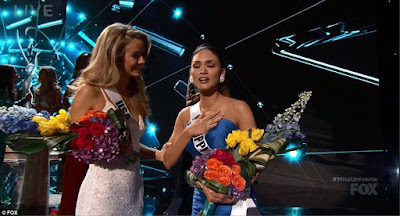 The telecast then came to an abrupt stop, cutting without credits or allowing Miss Philippines to take her first walk as Miss Universe.

‘I want to apologize emphatically to Miss Philippians and Miss Columbia,’ Harvey wrote in a tweet that has since been deleted in which he spelled both of the women’s countries wrong. ‘This was a terribly honest human mistake and I am so regretful.’

Fans immediately took to social media to react to the mistake, criticizing Harvey, expressing regret for Miss Colombia and praise for Pia. 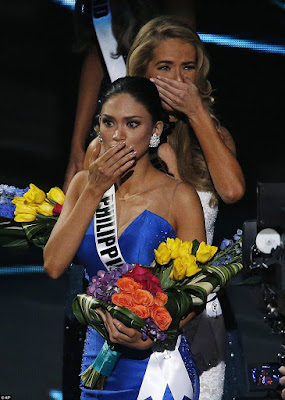 Another asked: ‘Can I hug Miss Colombia right now?’

‘I have to hand it to #PiaWurtzbach,’ wrote another. ‘She was careful w her reaction when she was called as Ms Universe. She knew a colleague was embarrassed.